A model says she was uninvited from

A woman who was set to be a bridesmaid in her close friend’s wedding said she was uninvited after looking “too good” in the dress that the bride chose for her.

Alena Yildiz, a 21-year-old model in Heidelberg, Germany, initially took to TikTok earlier this month to share the story with her audience of more than 170,000 followers.

Video: What a $41 wedding dress form Wish looks like 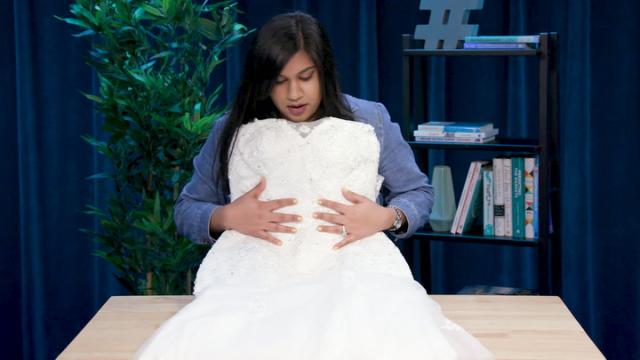 You can get wedding dresses for under 100 dollars on Wish.com. We ordered two of them and reviewed them based on size, quality, and price.

In a video posted on December 13, which had over 10 million views at the time of writing, she wrote: “My close friend uninvited me to her wedding because she thought I looked too good in the dress she chose for me.” The video continued with images of Yildiz in the dress with the caption, “Still took some fire pics in it though.”

Yildiz told Insider she was due to be a bridesmaid at the wedding in early December alongside five other women before her friend said she felt upstaged. “That’s why she chose such an extravagant dress for me — all of our other friends wore extravagant dresses as well, but she only had a problem with me,” she said.

Yildiz said the blue and tan embellished dress designed by Albina Dyla cost her 1,200 euros, or about $1,360, with each bridesmaid paying for her own outfit. The tulle dress had a corset with a mermaid neckline and leaf detailing, as well as a thigh-high side slit.

The model said she sent a video of herself wearing the dress to the bride, whose identity Yildiz said she didn’t want to disclose, shortly before the wedding. “She called me and told me about her insecurities with my dress — that it was too attention-grabbing,” Yildiz said.

“She was very angry about the whole situation and ended up uninviting me after the call. We got into a fight because it made no sense to me since she chose that dress herself,” she said. Yildiz added that she thought the bride should have chosen a different dress if she were worried.

With little time to find a new dress, and having argued with her friend, Yildiz didn’t attend the ceremony, she said. She added that while she was no longer friends with the bride, losing her had been sad. “It made me feel like I had no value to her as a friend,” she said.

“We talked about her wedding for years, and I was so happy for my friend to finally be with the love of her life and to celebrate with her,” Yildiz said. She added that the bride called her after seeing the TikTok video, and they argued further.

Yildiz acknowledged that brides have every right to make requests, such as asking that no one else wear white to the wedding, but she urged others to properly communicate their rules to avoid disagreements such as this one. She added that feelings of competition or jealousy only serve to create “toxic” relationships.

“Another women’s beauty doesn’t make your beauty fade, and I wish more people would understand that and be confident,” she said.